One of my favorite parts of international travel is meeting people and gaining exposure to the ideas, worldviews, social systems, and customs of folks around the world. I especially love having conversations with non-Americans about America. I once chatted with an Aussie in Florence for hours about the ‘90s NBA and learned that Hoosiers aren’t the only people who love Reggie Miller.

But even more than reminiscing about the infamous 1994 choke gesture, I love the lens of American politics and culture that’s afforded through conversations with an outside party.

I recently had the joy of spending two weeks in the UK, and got to understand a little better the Special Relationship that exists between our two sort-of-great nations. We have many notable differences—they have universal healthcare and still love Oasis as much as we did in the late 90s—but from what I gathered, we are shockingly similar in our culture, commercialism, entertainment, and political perspectives. 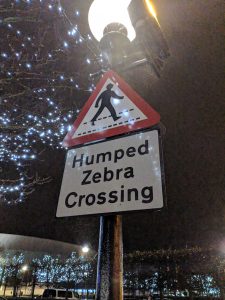 Alright, our language is not entirely identical.

Language is arguably the primary influence on (or at least reflection of) a culture, so it’s no surprise that Americans and Brits have so much in common. Our shared language is also what facilitates the effortless sharing of complex and nuanced ideas. US politics came up quickly in almost every conversation where my American citizenship was divulged, and it seems that anyone who pays attention to the news in the UK knows as much or more about our state of affairs as the average American.

So it was easy to jump straight into in-depth conversations about everything that’s wrong with the world. In pubs across London, my husband and I had conversations with locals about US and British politics, socialism, universal healthcare, gun violence, and the wave of sexual assault accusations against some of our most famous leading men. (My focus group of five would tell me the Brits’ understanding of fake news, gun violence, and sexual predation is better than 35 percent of Americans’.)

In every situation, my first course of action was to apologize for America and emphasize that most Americans, including this American, didn’t vote for Tangerine Palpatine. It was comforting to learn that most Brits saw Trump as America’s hold my beer response to Brexit, and are equally frustrated with the direction the UK is heading.

I learned that the political division among urban and rural Brits is just as strong as it is for Americans, and many rural communities and small towns bear some resentment for their economic dependence upon London. Turns out the English are as fiercely independent, stubborn, and self-reliant as we are.

They get all of our news: the mass shootings, the president’s past lawsuits and current tweets, the sexual assault, the overpriced healthcare. They got a really big kick out of Anthony Weiner.

And this side of the pond? We have a dozen 24-hour news networks and we still don’t get much of any news that’s not our own. We’re just not collectively interested in the goings-on of other countries. Like language itself, our news and entertainment dictate the ways in which we view the world. And we are generally self-centered and oblivious and unfazed by the effects our actions have on the planet or its inhabitants outside our borders. Or, as I heard it put, “America sneezes and the rest of the world gets the cold.”

What I encountered with the Brits I met was that they knew enough about our news to ask intelligent questions and take informed positions, but were distanced enough from our day-to-day reality to pass spiteful judgments. We also don’t have the same shared history, shame, and pain that carry the cultural baggage and enmity that Americans with opposing ideologies are butting heads over now.

We had perfectly civilized dialogues with perfect strangers, where all parties entered the conversation with genuine curiosity about the others’ perspectives, and listened as much as they spoke.

And it’s dawned on me since that this is more respect than we often show to our own families, friends, and neighbors when it comes to our most impassioned and important subjects. Most political conversations in America these days land on one end or the other of the God, I Know, Right? and F*ck You, Moron spectrum. Meaningful social dialogue among those with opposing views has all but gone by the wayside as we continue to turn inward, oblivious and untroubled by the effects our actions have on our fellow citizens.

Winston and I have a lot in common.

Conventional wisdom has it that we travel in order to learn something new about a place. I certainly learned a lot about Winston Churchill, the Beatles, mushy peas, and Tottenham Hotspur. But the more we learn about other people and cultures, the better we can understand our own. It’s hard to recognize the things that make us uniquely and painfully American from the comfort of our own sofas, and our differences exist not only across countries, but across political parties, genders, races, orientations, religions, occupations, ages, and incomes.

So travel, even if it’s just across the street. Meet new people. Do your research. Be curious, and ask genuine questions with an open mind. You’ll learn something about your neighbor, even more about yourself, and you might just discover that we’re all more alike than we are different.